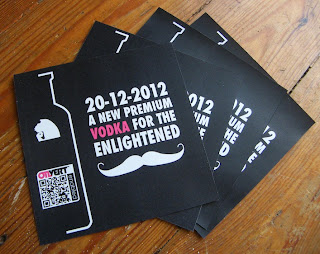 Probably the last entry into the onvert competition - with the closing date just over a week away - takes advantage of two features:
The idea is fairly simple.  A company sends out flyers to promote its new product.  If you scan the QR code then you're taken to a site where you can buy it.  However, if you scan it with the onvert viewer, then it also reveals a discount code that you can use on the site.

Of course the code wouldn't stay secret for long, and it would probably be on those discount code sites a couple of minutes after the flyers went out; but that's not really the point.  The aim is just to build some engagement with the brand. 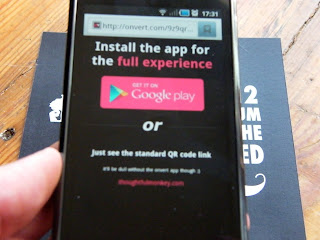 The view in onvert viewer: 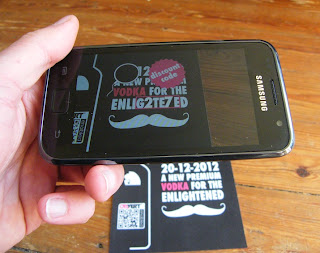 Posted by Matthew Leach at 12:05 No comments:

The profile name originally attached to this blog was Lucius Nesterov; which was my Second Life account name. If you're unfamiliar with Second Life, then I should say that originally you had to select a surname from a predefined list, so it's not as random as it seems.

Since the blog has become more general, I'm switching to my real name of Matthew Leach.

Probably like a lot of people, I've built up a legacy of weirdly named accounts across different online services. Over the past couple of weeks people have, understandably, refered to me as Lucius Nesterov, and it seemed weird. 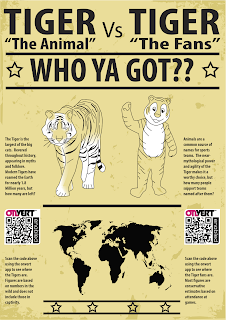 Posted by Matthew Leach at 02:15 No comments:

onvert?
onvert seems to be a fairly new entry into the smart-phone Augmented Reality market, and they're running a competition to start things off: http://onvert.com/competition/. I'm still kicking myself for not submitting to the Layar one, so I couldn't let this one slip by.

onvert use quite a nice system where you scan a QR code to launch the augmentation - removing any chance of confusion between different people's creations. The best part though is its simplicity. You can just upload 2 images to the website (a target image and the augmentation), and you've got yourself some AR. This obviously means that you're limited in what you can do with it, but it covers a lot of what people will want to do.


Topic of Submission
I've got a few ideas, but the first one that I went with is based on toy packaging. It seemed best if the augmentation provided half of the content; not just a little bit extra. The concept was to use a transforming toy, where the AR revealed what it looked like in its transformed state.

However, I didn't want to get disqualified at some point for using copyrighted imagery. So...


Creating a Transforming Robot
Time for a lengthy diversion. I decided to create a papercraft robot for "simplicity". The basic process was:

Shown below are the prototypes (the one on the right was to check face orientation before adding graphics): 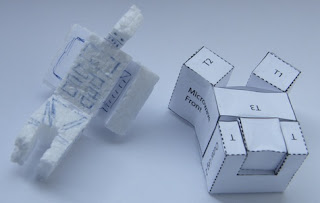 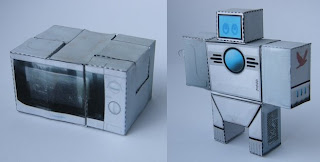 Not bad as a first attempt at papercraft, but definitely more work than I was expecting.

The diversion continues, as now it was time to create the packaging. The most important features are the onvert QR code and reference image on the back. You could pick up the box, scan it, and then see what the transformed version would be like. 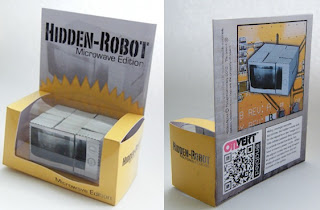 Eventually it was time for the main event. Using photographs and graphics from the previous steps it was fairly quick to put together. I went with 3 layers in the AR - a shading layer, an intermediate step, and then the final transformation - arranged in a kind of upward spiral. The images, including reference are: 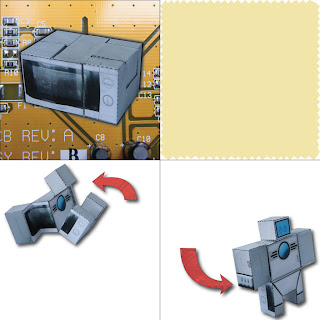 With the composite image: 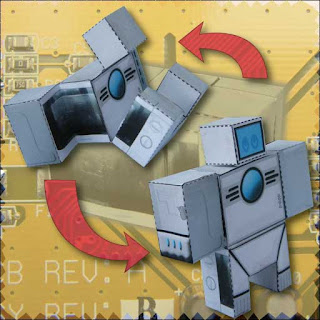 Experience it yourself using the tag and reference image below: 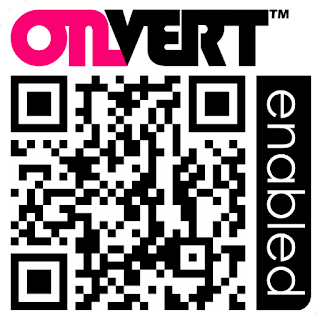 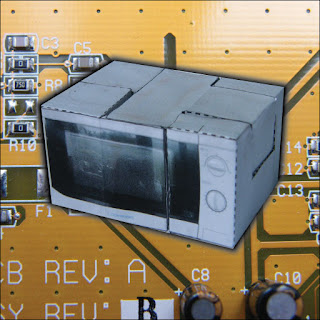 2 days, 2 presentations - both on Second Life. The first a joint presentation in an arts-focused seminar, based on the virtual theatre work, the second a presentation to built environment educators and trainers on the University's virtual quarry.
Common to both was the advice that anyone looking into using immersive simulations in their teaching, should make OpenSim their first choice. I'd guess that it's common advice circulating through the educational sector. At a time when funding is being cut to the point that jobs are being lost, there's no way of justifying the cost of 'trying it out'.
A model is starting to form in my mind where institutions jointly hire some hosted OpenSim land, and collaborate to produce a learning activity. And then when it's complete each institution takes a copy to use on their own local servers, run when required. We're entering times where the efficient use of resources is paramount.
Posted by Matthew Leach at 14:37 4 comments:

... possibly. Towards the end of last year Linden Labs officially announced that Rod Humble would become the new CEO. Having had a very successful career in the games industry, there are justified expectations that under his leadership Second Life will become more game-like. Whether that includes a focus on content or is more the "feel" of the experience, we'll wait and see.
With Mr Humble not due to actually start in the role until mid-January, I wouldn't have expected to see any impact until around the Summer. However, there are already some signs of shuffling at Linden Labs, such as the new blog post on games. It relates mainly to the category in the destination guide - which has gone from no mention of games at all, to a combined 'sports and games' category, to giving games an entry all on their own.
As I mentioned in the comments of that post, I don't see the point in separating sports and games in a virtual world like Second Life. The distinction between sports and games in the real-world is mainly due to culture and organisation - for example Kabaddi compared to British Bulldog. Currently Quackerstone Duck Racing is in the sports category; really? Categories are always tricky, which is why we shouldn't be using them anymore - see "Everything is Miscellaneous" - but for sports and games in SL I think that if you're looking for something in one, then you'll enjoy what's in the other.
Posted by Matthew Leach at 01:18 No comments: 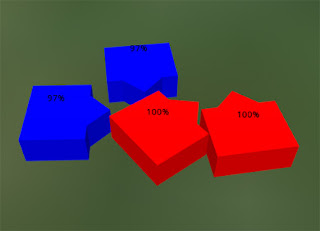 Got distracted there for a while so things ran on for more than half a day. Still, this is the last update.
Just to round things out I added in melee. Very simply when a unit activates it scans for adjacent enemy units and then distributes its melee attack across them. By rights it should also lock movement, but that's for another time.
The end result is a skeleton for a more advanced system. At the moment there are no real rules, but I've tried to use a modular system that would make it easier to expand. The visuals are also more at the abstract end of the spectrum, but they could be replaced with small figures or, maybe in an OpenSim megaregion, full-size models.
Posted by Matthew Leach at 11:37 No comments: